One game after looking like relegation back to the United Soccer League was a prudent course of action, FC Cincinnati pulled a winning rabbit out of the hat against Atlanta, and now stands on the precipice of moving on to the knockout stage of the MLS Is Back tournament.

First things first, though: FCC needs a result tonight opposite the New York Red Bulls. A victory would seal advancement into the 16-team knockout round, as would a draw. The Orange and Blue (3 points, minus-3 goal differential) are fifth in the third-place wild card standings, and the top four third-place teams move on, so one more point via a draw should put them through. A loss eliminates FCC and would send the Red Bulls (3 points, minus-1 differential) through as the second place team in Group E. Atlanta finalized its horrid MLS Is Back showing with a 1-0 loss to Columbus July 21 to finish last in Group E.

The Orange and Blue put themselves in this position by downing what eventually became a nine-man Atlanta squad 1-0 last week. FC Cincinnati registered its first clean sheet of 2020 and its first victory in its last nine league matches, dating back to a 1-0 triumph on Sept. 14 vs. Montreal. That’s 10 months without win. Captain Kendall Waston’s words and actions after the game encapsulated the relief and joy FCC must have felt. As I wrote last week, sustained losing chips away at a team’s mental fortitude. FC Cincinnati are a fragile bunch given everything that’s happened to them since joining MLS. And when frailty defines you as a team, when doubt creeps in during the game and/or things take a negative turn, heads drop and self-pity creep in. As head coach Jaap Stam said post-Atlanta, “We need to be realistic with where we are as a team.”

No doubt there was some good fortune involved in the win. Atlanta was forced to play with 10 players after Jake Mulraney was ejected when he picked up his second yellow card in the 26th minute, and VAR overturned a penalty awarded to the Five Stripes just before halftime because of a razor-thin offside in the build-up. Atlanta is also still adjusting to life without former league MVP Josef Martínez, who suffered a season-ending knee injury in the season opener. He scored 58 goals across 2018 and 2019; there’s simply no patching a hole of that size, and it forces a team to alter its game-to-game strategy and season expectations.

But FC Cincinnati wasn’t playing with a full deck either. Allan Cruz, Siem de Jong, Greg Garza, and Jurgen Locadia were unavailable due to injury. (I’ll keep saying this until Locadia comes back and starts scoring with regularity: Don’t underestimate how critical he is to this side. He is a stud.) Stam made five changes to the starting XI from the first game and set the team up in a 3-5-2 defensive citadel by playing three center backs: Kendall Waston, Mathieu Deplagne, and Maikel van der Werff, who eventually went off injured and gave way to Tom Pettterson. Andrew Gutman and Joe Gyau operated as wingbacks on the left and the right, respectively; Frankie Amaya, Haris Medujanin, and Caleb Stanko sat deep in the midfield; and Adrien Regattin and Yuya Kubo were alone up top.

ESPN analyst Taylor Twellman, one half of the broadcast team, offered multiple soliloquies bemoaning FC Cincinnati’s conservative strategy throughout the match. First of all, the teams were playing at 9 a.m. in the Orlando heat … in a tournament staged in a medical bubble … during a global pandemic. The setting wasn’t exactly normal.

Second, the best way for FC Cincinnati to stay in the game vs. Atlanta was to sit back in its defensive block and withstand the pressure. The mismatched roster that was put on display in the club’s tournament-opening 4-0 loss to Columbus illustrated the need for simplicity and some confidence-building. Could FCC have been more adventurous getting forward following Mulraney’s ejection? Yes. But the plan worked. And it’s not like the Orange and Blue were completely static; as the first half wore on, they compiled possession inside Atlanta’s penalty area and fired off multiple shots from close and medium range, but all were blocked before reaching the goalkeeper. (One of Twellman’s points I concurred with is that de Jong and Medujanin can’t play together, at least not given FCC’s current personnel in the 4-3-3 and 3-5-2 systems Stam has installed.)

In the second half, FC Cincinnati retained more possession and pushed forward with regularity. Deliverance finally arrived in the form of Frankie Amaya’s wonder strike (and first career goal) in the 76th minute after a feed from Regattin. Amaya has been FCC’s standout player in MLS Is Back. Per club statistics, he completed 56 of 58 passes vs. the Crew and won a team-best four tackles. Against Atlanta, Amaya completed 51 of 53 passes and was 89 percent accurate with his passes in Atlanta’s half. (Shout out to FCC’s Charlie Hatch for those numbers.) The 19-year-old has been a two-way force in midfield.

There were other strong individual displays vs. Atlanta. Gyau showed himself well on the right flank. He busted his ass on defense, featured poise on the ball to hold play up, and burst forward when offered the chance. Gyau was unlucky to not pick up an assist after he fed Kubo in the 61st minute—FCC’s first shot on goal—forcing a great save from Atlanta goalkeeper Brad Guzan.

I also prefer Gutman to Garza, whether it’s at left back or at left wing. Garza apparently picked up a knock during the opener, but Gutman has shown more defensive discipline than him while capably springing forward into the attack. Garza has credentials as a former U.S. international and an MLS All-Star and MLS Cup winner with Atlanta. But Gutman, who is five years younger than Garza at 23, is not without license himself; the former college player of the year is technically the property of Scottish power Celtic F.C.

Victories against perennial powers like Atlanta are the building blocks FCC require. Stam and his staff laid out a plan, and a deeply flawed and Locadia-less team got a win out of it. Let’s see if they can do it two games in a row. The Red Bulls nearly blew FC Cincinnati off the field in the first half of the teams’ 2020 season opener back in March, with the visitors exhibiting the defensive weakness and disconnectedness of the 2019 squad. But the second half was a different story. FC Cincinnati got into the game, New York’s legs grew weary, and Locadia notched his first goal. More than four months have passed, and much has changed. FCC can top New York in much the same way they beat Atlanta: sit back, defend and let Red Bulls hustle, bustle … and not offer much else. Through two games, New York has one goal and four shots on target. FC Cincinnati has one goal and six shots on target. Prepare for a soccer rock fight.

Orlando City, Philadelphia, San Jose, Seattle, Toronto, New England, Sporting Kansas City, Real Salt Lake, Minnesota, Columbus, Portland, and LAFC have already qualified for the knockout round. FC Cincinnati is another solid performance away from joining that group, which would be the club’s greatest achievement since it joined Major League Soccer. No pressure, lads.

Grant Freking writes FC Cincinnati coverage for Cincinnati Magazine. Off the pitch, he is the associate editor for Signs of the Times magazine. You can follow him on Twitter at @GrantFreking. 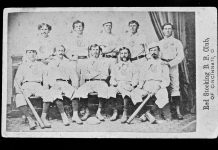 Baseball Came to Cincinnati Even Earlier Than We Thought 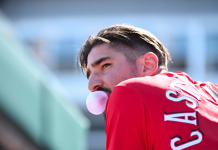 The Cincinnati Reds Are Ready to Play Ball 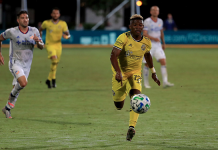 Can FC Cincinnati Salvage Some Dignity?