Editor’s Note: This review was written in February, prior to dine-in restaurant closures. Losanti reopened its dining room and patio for reservations only on May 21. Please call ahead to confirm hours and services.

You go into a steakhouse with pretty clear expectations, and Losanti, the second concept from Chef-Owner Anthony Sitek and the team behind Crown Republic Gastropub, meets them beautifully. It’s a bit more upscale than its sister restaurant, and it’s also more conservative in its offerings. This is crowd-pleasing fare with a firm grasp on essentials, and when there are little surprises, almost all of them work.

Some people online, I noticed, took offense at a warning on the menu: “Losanti is not responsible for appearance or taste of well-done steaks.” This could come off, I suppose, as snobbery. The actual experience of dining at Losanti, though, is thoroughly un-snobbish. Service is friendly and informal, and though the meal feels like a special occasion, prices and atmosphere are right for, say, a date, rather than a wedding anniversary. And the food is approachable without ever being ordinary.

Taking over the old Anchor OTR space by Washington Park, Losanti has been portioned into several small sections: a large square bar by the entrance that dominates the room and two intimate rooms off to either side, one with a portrait mural of a woman who I thought was Marlene Dietrich. Turns out that’s Rosie, inspired by co-owner Haley Nutter-Sitek, Chef Sitek’s wife. It’s fitting that the decor has a family connection, because that’s exactly the feeling the food gives off: homey, approachable, and with deep and familiar flavors.

Losanti bills itself as a “boutique steakhouse,” where the filet mignon, rib eye, and New York strip are cut to order for each table (there are a few available weights for each). Losanti must grind its own hamburger meat from the scraps to make the wonderfully tender burger, which ends up a falling-apart mess on the plate but is quite delicious. The steaks themselves are totally irreproachable. (I let the chef cook them medium-rare, so I wouldn’t have to be held responsible!) Everything was perfectly seasoned, cooked to precisely the right point, and with just the right touches on the side. Each steak comes with a head of garlic, mellowed after several hours of slow roasting, that can be squeezed out onto the meat as a flavorful paste. With a few spritzes of accompanying charred lemon, this is really all you need to savor your entrée.

The cocktails are standouts, especially the gem-like sage gimlet, a lovely green from the chartreuse, with an inspired sprinkle of ground black pepper on top: tart, spicy, and herbaceous in equal measure, it continues the Crown Republic bar’s winning streak. Since Losanti is a more elegant kind of restaurant, the wine program still feels thin to me, with only a handful of options, but with cocktails this good I won’t complain too much.

The requisite steakhouse sides are also available, including mashed potatoes, mac and cheese, and sweet corn, but Losanti makes each one a little special. Sweet and smoky caramelized onions are folded into the mashed potatoes, a nice dusting of truffles wakes up the mac and cheese, and the sweet corn—yes, totally out of season, but still good—is at least freshly cut off the cob and recalls elote with lime and chile powder. At first, I was craving more intense Mexican flavors in the corn, but when I spooned it onto the plate with the other items, I realized it would have overwhelmed everything else. Someone here is thinking about balance. This is part of their grasp on essentials.

Only rarely does this balance get lost, sometimes between elements of certain dishes, and other times in the balance of light and heavy across a whole meal. Saffron, for me, is one of those dangerous ingredients like truffles—a dash too much and it utterly dominates a dish, as it did with the saffron cream on the orecchiette. Soggy croutons that had soaked up too much salt and dressing marred the otherwise excellent flavor of the kale Caesar.

Also, if you don’t order carefully—and I definitely got too much—the richness of the dishes can feel like a burden instead of a treat. All of the desserts, from butter cake to brownie, desperately needed some fruit or an herbal note—anything other than more sweetness and cream.

Mostly, though, if you order thoughtfully and create your own balance, you will be satisfied. Entrées like the chicken paillard, with its lovely arugula salad and lemony lightness, refresh the palate in an otherwise rich meal. My advice: Seek out something green and varied to set off the rest of the food, like one of the fine salads or the excellent rock shrimp scampi, with its light, sour-and-spicy broth and a faint basil note from the herby spread on the bread.

Still, this is a steakhouse, so I suspect most people are coming prepared for a big meal. And that is exactly what they will get, for a price quite a bit less extravagant than our town’s other purveyors of fancy steak. Losanti is doing the big things right. As with Crown Republic, this place is simply solid, and gives off a not-going-anywhere feeling right from the start. 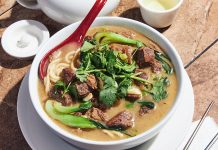 Great Tang Is a Revelation of Authentic Chinese Flavor 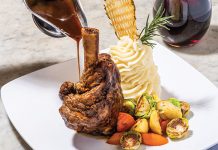 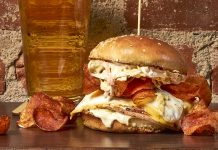