Regular drivers on Section Road will recognize this Amberley Village house. Tucked in among sprawling, mostly much older homes, the unique red brick structure was one of just two pedigreed “moderns” on the street until a few years ago. Locals know it as the Wolf house, named for the couple who commissioned it—Alan and Louise Wolf. Architecture buffs know it as another striking work by Cincinnati’s Mid-Century Modern icons, Carl Strauss and Ray Roush.

The Wolfs had the house built in 1976, but their first experience with the famed architects’ work came from a prior home in North Avondale, where Strauss and Roush had done renovations. “I never liked the house except for the parts Carl and Ray had done,” Louise says. That, plus the fact that the pair wanted to relocate to Amberley Village, led the Wolfs to purchase this plot of land and former site, says Louise, of “the Aracoma riding stable.”

But Alan, who was in the roofing business, initially refused to work with Strauss and Roush, because “Carl’s flat roofs always leaked,” says Louise. Eventually, he came around—under one condition: note the sloping black metal roof. Meanwhile, Louise fondly recalls seeing both Strauss and Roush on site every day while the house was being built. “Ray and I really bonded,” she says, “and Carl was an absolute delight.” When all was said and done, she adds, “it was a life-changing experience.”

Over the years, some adjustments were made. Strauss and Roush converted a former courtyard into the current brick-walled dining room, complete with hand-polished, crushed rock floors. Later, the Wolfs commissioned E. Thomas Fernandez to design changes to the original living room balcony and add on a family room—or accessible owner’s suite—and garage (Fernandez did not need, but respectfully sought, Strauss’s approval on both, Louise says).

Now, in search of a new owner, every inch of the meticulously maintained home remains a Strauss and Roush masterpiece—functional, beautiful, straightforward, and very much in sync with its lush one-and-a-half-acre site. Perhaps author and architectural historian Jayne Merkel described the architects’ overall legacy best. “I think they really wanted to make wonderful places,” she said in the Strauss and Roush documentary, A Hillside Firm. “And they wanted to make wonderful places that didn’t ruin the places where they put them in the first place.”

Lisa Murtha first discovered the work of Carl Strauss and Ray Roush as a producer on WCPO’s Around the House in the early 2000’s; she went on to create, write, and produce A Hillside Firm, which aired on CET and was nominated for a regional Emmy award in 2006.

Click through our gallery to view more photos of this home: 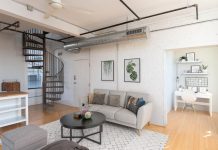 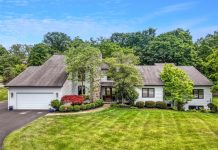 A Contemporary Suburban Stunner in Evendale 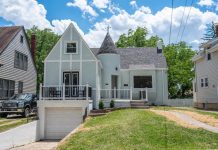 This Kennedy Heights Mini-Castle Has a Sweet History